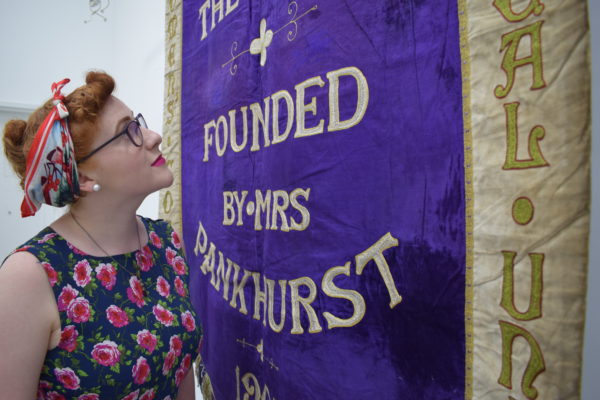 For Freedom week we spoke to Helen Antrobus, Programme Officer at the People’s History Museum, to find out why Manchester has always been home to radical thinkers.

What do you think makes Manchester so radical?

Manchester has radicalism built in its foundations, from the Free Trade Hall to the Cathedral, to Stevenson’s Square. The people of Manchester believed in reform and equality, they gave a platform to the voiceless, and they recognised the importance of the many, not the few. We often think that Peterloo was Manchester’s first radical moment, but this city was fighting for the abolition of slavery well before that. It’s the people of Manchester – the workers, the hive. They inspired change and reform that still exists today.

Is the idea of freedom particularly important to Manchester compared to other cities in the UK?

How important has Manchester been in Britain’s development?

We often think of the cotton trade and the industrial revolution when we think of Britain’s development, but look at how significant Manchester has been in the country’s political development. The fight for universal suffrage began here. The fight for women’s suffrage started here – the first woman to vote, Lily Maxwell, was from Manchester! Without this radical city supporting change, Parliament, and the laws that shape our country, would be very different – or it would have taken a lot longer for changes to be made.

Which radical thinker do you think has had the most impact on today’s society?

Mary Wollstonecraft. She isn’t remembered as she should be. She lived outside the social normalities, she believed in revolution, and above all, education for women and girls. She acted too, and set up a school for girls. I think if people had listened to her sooner the fight for gender equality would be much further along.

Do you think it’s important to teach young people about freedom?

It’s one of the most important things to teach. At a time of international political unrest and where hatred is openly expressed to people of different race, religion, sexuality or gender, teaching the lessons of freedom, democracy and solidarity are more important than ever. Manchester was doing it 200 years ago – we should be carrying on that legacy today.

Which freedoms do you think we most take for granted?

Two hundred years ago the people of Manchester were asking for the simple right to vote. Most of us have that vote, but not all of us use it. We are free to use our voice and our vote. Use them wisely. Use them for change. Use them so we never lose them.

The People’s History Museum is the national museum of democracy, telling the story of its development in Britain: past, present, and future. The museum provides opportunities for people of all ages to learn about, be inspired by and get involved in ideas worth fighting for; ideas such as equality, social justice, co-operation, and a fair world for all. It is open seven days a week from 10.00am to 5.00pm, Radical Lates are on the second Thursday each month, open until 8.00pm. To find out about visiting the museum, its full events programme and more, visit www.phm.org.uk.

Along with curating the current crowdsourced exhibition, Represent! Voices 100 Years On and planning the events programme for 2018, as a historian, Helen’s specialist area is 20th century radical women.

There are many Bees to be found at the People’s History Museum. As well as big Bee Sylvia, sponsored by UNISON Manchester and UNISON North West, there are five smaller Bees decorated by schools and groups.