See artwork from the next generation of artists 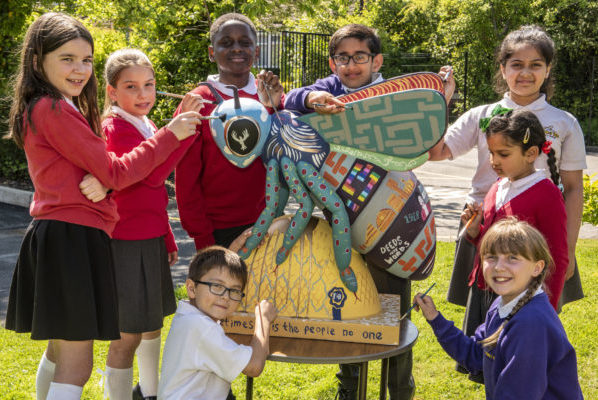 School children from across Manchester will have their artwork on display this summer as part of Bee in the City. Over 230 giant and medium-sized Bee sculptures will take to the streets from 23 July until 23 September in a celebration of Manchester’s creativity and pioneering spirit.

Pupils from primary, senior and special schools, nurseries and library groups have finished decorating 130 Bee sculptures. Some schools have involved every pupil in creating their design, whereas some ran competitions to select a winning artist. The designs explore a range of themes from equality and diversity to school values and local history.

Some schools’ designs are based on famous figures they have studied in lessons, such as Prospect Vale Primary School’s Beenigma. Their design celebrates the life and achievements of computer scientist and mathematician Alan Turing, known for his code-cracking at Bletchley Park during WWII, and the work of Manchester-born Suffragette Emmeline Pankhurst.

Other schools’ designs focus on the history of their local area. Russell Scott Primary School’s Bee Mad is inspired by Denton’s hat industry of the 1880s, and references Alice in Wonderland due to the ‘mad hatters’ disease caused by mercury poisoning in hat making. Godfrey Ermen Memorial School remembers the Victorian mill owner their school is named after, whilst Boothstown Methodist Primary School have called their Bee Arthur after the very first pupil to attend the school.

Many schools are celebrating the diversity of their pupils, including Burnage Academy for Boys, Ellesmere Park High School and Withington Girls’ school, who have all decorated their Bees in the flags of countries their pupils and their families are from. Inscape House School specialise in teaching children on the autistic spectrum, so pupils past and present have decorated the Bee in multi-coloured hexagons to represent the diverse nature of autism.

Other Bees feature the things that pupils love about Manchester, from famous Mancunians to well-loved buildings and locations. They also acknowledge the city’s bravery and strong sense of community, as some schools have chosen to pay tribute to those who lost their lives in the Manchester Arena attack last year.

The Learning Programming will officially launch on Wednesday 4 July when the schools and groups come together for the Hive of Creativity Festival; a celebration of the young people’s involvement in Bee in the City. The school Bees will then go on display in 19 venues across the city centre and further afield, including Manchester Cathedral, the National Football Museum, the Royal Exchange Theatre, Longsight Library, and the Stables Café in Heaton Park. At the end of the trail each school or group will be able to keep their Bee as a lasting legacy for their pupils.