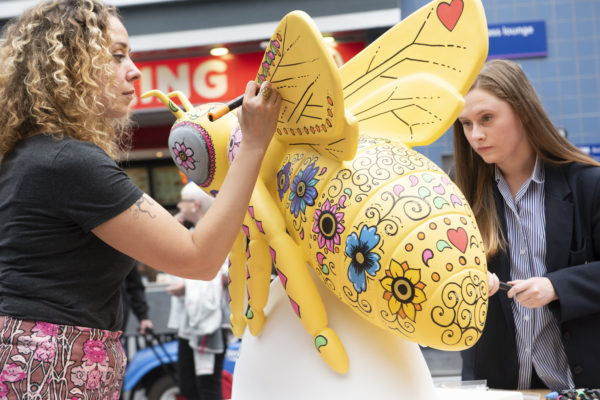 With the help of passers-by in Piccadilly Station, 15-year-old Talia and artist Jodie Silverman have painted a little Bee as part of an initiative by Virgin Trains, a presenting partner of Manchester’s buzzing public art trail.

Talia came up with the design as part of a competition ran by Virgin Trains for under 16s to create and take home a little Bee. Jodie Silverman, the artist behind The Original Worker Bee sculpture that kicked off Bee in the City, brought the artwork to life during a live painting session at the busy train station. It gave people the opportunity to place their mark on the final Bee – the 233rd – for the city’s free, fun art event.

Talia, a pupil at King David High School who wants to be a graphic designer or illustrator, said: “What really interested me in Bee in the City was the amazing artwork on each Bee. I noticed how each Bee was created by a different artist and no two Bees are the same, which really made me think about how everyone is creative in their own way. The idea of the Manchester bee is so wonderful, as it brings everyone together and inspires hope for people.

“I came up with the design when I was travelling down to London on a Virgin Train and I never thought I would win. The fact that it is the last Bee to be painted is really special, and I’m so grateful to be a part of it. I can’t wait to see it finished!”

Gaynor Stewart, Virgin Trains General Manager for the North West and Wales, added: “Congratulations to Talia. Her design really stood out and is was great to see the smile on her face when she saw her Bee for the first time.

“Bee in the City is a celebration of all that is good about Manchester. It has captured the hearts and minds of so many. So, it seemed fitting that Talia’s design was brought to life with the help of so many at the station today. A big shout out goes to all of them.”

Although Talia’s special addition to the colony, named Day of the Bee, will not be on the art trail closing on Sunday, people will be able see it at the Farewell Weekend in October before she takes it home. All Bees from the main trail, together with Day of the Bee, will be gathered together at the HSBC UK Cycling Centre on 12 – 14 October.

Ticket holders will be able to get up close and personal with the Bees at the Farewell Weekend before many are auctioned off to raise funds for the Lord Mayor of Manchester’s We Love MCR Charity. Over 70 of the giant Bees will be heading off to their new hives after the Auction, but 23 super-sized sculptures that have been decorated by community groups will be staying in Manchester as a lasting legacy of the Bee in the City project. All of the 131 little Bees will make their forever nests with the schools and youth groups that created them.