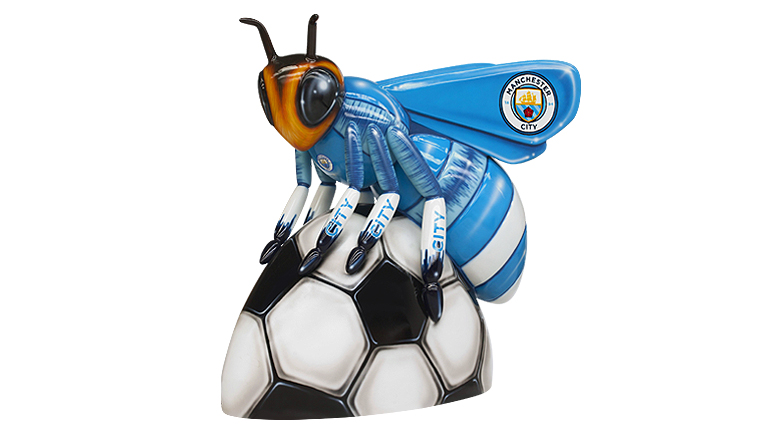 Designed and decorated by: Adam Pekr-Inkversion.

Based on City’s distinctive, new sky-blue home strip, this Bee celebrates the club’s Premier League-winning 2018 season. The ‘City centurions’ broke eleven records during their campaign, including becoming the first team ever to reach 100 points in a Premier League season; scoring the most goals; enjoying the biggest winning margin and the earliest title win. Un-bee-lievable!

Manchester City Football Club’s history dates back to 1880. The Club enjoyed its most successful season ever in 2018 breaking many Premier League records. Based at the famous Etihad Stadium, the Club’s City in the Community, now over 30 years old, has been using football to create opportunities, build futures, engage with young people, and touch the lives of thousands of local people every year.

Adam is a Czech-born airbrush artist who started his artistic journey in graffiti art. Highly influenced by the ground-breaking airbrush work of H.R Giger, he combines his predisposition for realism and high detail with his vivid imagination. A multi award-winning Tattoo Artist of 7 years, he is now solely focused on developing his airbrush art career. http://www.inkversion.com