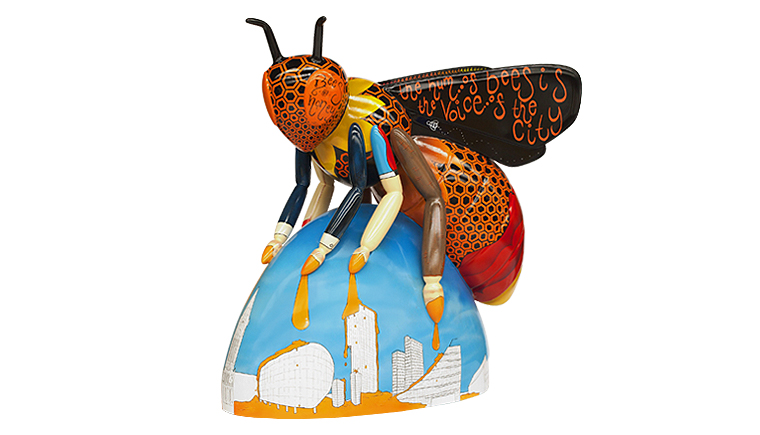 Designed and decorated by: Tom Brader.

The design encompasses Manchester’s three pillars: education, sport and industry (specifically textiles) through the ‘arms’ of the Bee. Manchester’s famous landmarks are drizzled in honey, whilst the body bares honeycomb and flowers, including the Lancashire rose. Text on the wings ‘The hum of bees is the voice of the city’ acknowledges the work of Manchester people throughout time.

Instantly recognisable, Metrolink’s iconic yellow trams are synonymous with Greater Manchester. It’s the largest tram system in the UK, catering for more than 41 million journeys a year. Officially opened by the Queen in July 1992, it has grown rapidly in recent years and now has seven lines and 93 stops connecting large parts of the region, with a new line to the Trafford Centre due in 2020.

Tom is a multi-disciplinary artist with an interest in theatre and three-dimensional design. He likes to interact with other artists and work collaboratively, believing human relationships are key to successful art. In this project Tom has honoured the workers who built our city. The hum of bees is the voice of the city, and Manchester hums loud. http://tombrader.com