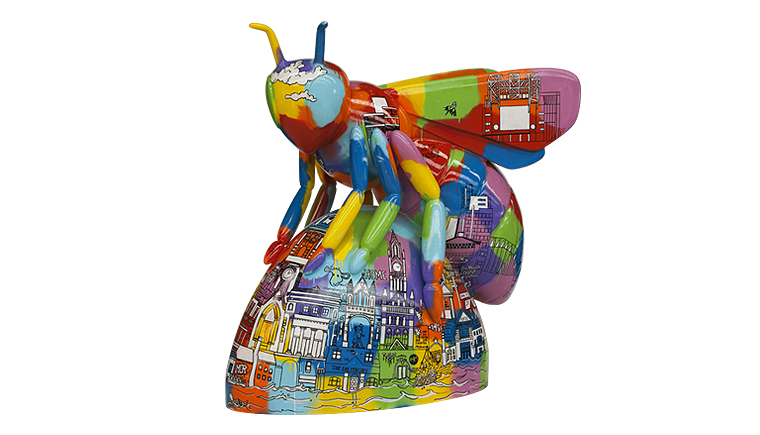 Designed and decorated by: Meha Art.

Originally from Kenya, Meha is now based in Manchester. Her colourful, illustrative Bee takes inspiration from Manchester’s ever-changing skyline. It tells a story about the bustling city and the worker ‘bees’ that have shaped it, and incorporates aspects of the city’s architecture, music scene, street art, sporting background, sculptures and industrial past, along with the individuals that make the city.

Henry Boot PLC is one of the most progressive companies of its kind within the UK. Established over 130 years ago, the company operates nationally in property development and investment, land promotion, construction and plant hire. They create spaces that not only impress but that stand the test of time.

Originally from Kenya, Meha is now based in Manchester. She studied a foundation year at London Camberwell University of Arts in 2005 and considers herself as a self-trained as an artist. She's been drawing and creating for many years, and is never without her sketchbook! She is lucky to have travelled to many places all over the world, and it’s this experience that has enriched her creative style. She is influenced by the intricacies of the Far East, and the vibrant, visual culture of South America. Her work is vibrant, intricate pieces inspired by everyday interactions and emotions. Meha also does one off commissions, particularly of cityscapes, as well as large wall murals which are perfect for brightening up dull office spaces or bringing a unique piece of art into your home. Find out more at mehaart.com