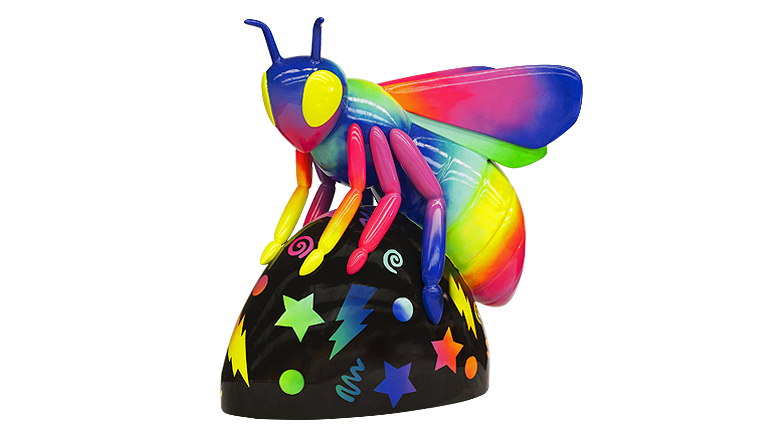 Designed and decorated by: Caroline Daly.

Manchester loves a party! The 80s and 90s nightlife and rave scene gave the city an international reputation as a centre of music, culture and art. This scene has had a lasting impact on Manchester and helped it develop into the modern, creative city it is today. The Bee’s fluorescent colours are influenced by the iconic, neon fashions that became such a signature of that era.

Ask Real Estate is a Manchester based property development company creating new places where people want to be. Together with the Richardson family and PATRIZIA UK, Ask is leading on the continued expansion of the vibrant First Street neighbourhood in Manchester city centre. With HOME, INNSIDE and leading independent bars and restaurants, First Street has become the destination of choice for visitors and businesses alike.

Caroline grew up in the 80s and 90s in South Manchester, listening to tapes, playing with Spirograph and wearing roller skates. (Not all at the same time!) She studied Theatre Design in Liverpool where she developed skills in technical drawing and scenic painting. Now she can be found back at home in Manchester creating detailed hand drawn illustrations. http://www.carolinedaly.co.uk @missdalys