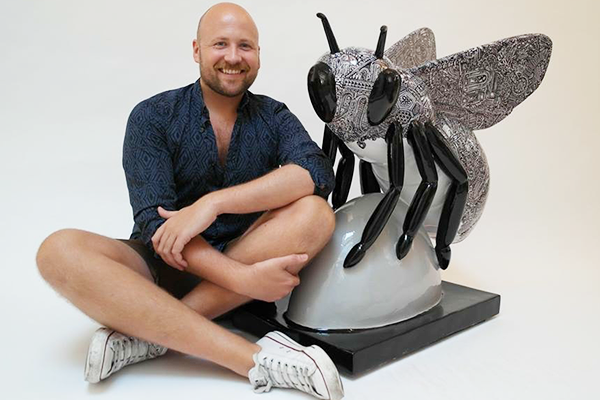 Not too Shab-bee, sponsored by construction company ISG, will reside in the The Lowry Hotel’s lobby until 10 October 2018.

The Not too Shab-bee Bee which featured in this summer’s art trail will make a final stop at the The Lowry Hotel in its ‘natural’ habitat created by the hotel’s florist, before flying to the Bee in the City Charity Auction. See it in the hotel’s lobby until 10 October before it heads to auction at the HSBC UK National Cycling Centre.

Thomas Wolski is a post-conceptual British artist working between London and his current Manchester-based studio. His illustrated works of delicately detailed, yet iconic bold silhouettes, is a signature and instantly distinguishable style. His recognisable outlines draw you in and incite your curiosity. Once captured, the artworks tease your eyes to reveal the delights of the ‘filling’ – intricate lines, magical worlds, and hidden treasures.

Nostalgic objects or figures that have been collected over an age provide the source of inspiration. Tom’s mantra is “always say yes” and try new things. His works are derived from the memories provoked by these experiences and the association with the iconography that triggers the memory. Famous brands with significant history therefore take a prominent position in his work.

Tom’s more recent creations are literally jumping from the page as he translates his technique directly on to the icons themselves, creating three dimensional sculptures and figures of endless excitement.

Tom is also passionate about using his art to give back and has donated many pieces to various charitable organisations, auctioning at the eponymous Christie’s auction house London.

Taking about Not too Shab-bee Tom said, “This one of a kind piece sums up the city of Manchester perfectly because it’s exactly what we Mancunians are all about. It’s an iconic figure that represents the essence and history of this famous city. An image so recognisable yet filled with wonder.

Manchester is another world, showing our international sovereignty and multicultural diversity. But when you look closely it’s a twist on all of the traditional images.You’ll always find something new and different whenever you look – just like Manchester. Drag queens, architecture, beer, fashion, industry and of course umbrellas are just a few of the types of things you could find exploring the artwork.”

He continued, “I’m proud to collaborate on such an iconic project with such talented people. Living in the rich art heart of the city I feel part of it and the images are extremely vivid to draw for me. I am part of the city and with this piece so are you. Everyone is welcome in Manchester.”