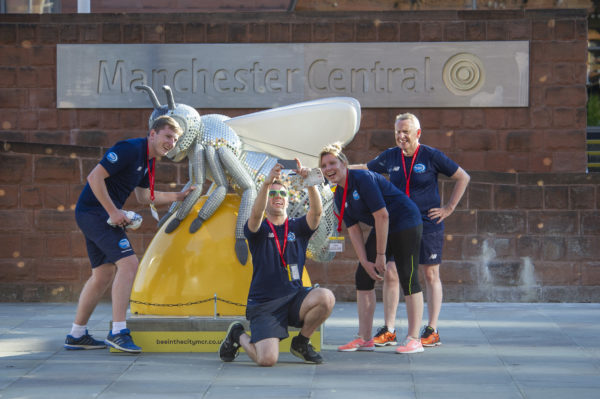 Bee in the City sponsors went head to head in the Sponsor Challenge last night to raise money for the Lord Mayor of Manchester’s We Love MCR Charity.

Representatives from 36 Bee in the City sponsors took part in the challenge, which was hosted by Manchester Central. The aim was to take a self-bee with as many Bee sculptures as possible in 2 hours and 6 minutes – the time it takes to travel from Manchester Piccadilly to London Euston with Virgin Trains. Teams could travel around the city in any way they wanted, whether on foot, bike or by hopping on the tram.

There were 13 categories to win and some fantastic prizes up for grabs, including a medium Bee sculpture for the team who collected the most Bees, a weekend stay at Innside by Meliã Manchester and even a year’s supply of Curly Wurlys!

The teams assembled outside host venue Manchester Central at 4.30pm, where their CEO Shaun Hinds officially opened the race. Everyone had to be back for 6.36pm with as many Bee snaps as they could get, ready for the prize giving and an all-important celebratory beer…

The first team to return to Manchester Central were Harvey Nichols, winning a signed Andrew Cole print courtesy of Manchester United. The Best Photo prize (a £50 Hatch voucher donated by Whitecroft Lighting) went to Bruntwood, whilst Best Use of Transport (a Cycle Experience from MCRactive) was picked up by The Federation for pushing team members round in a pram!

The overall winners were ARUP, coming in at a total of 65 Bees – over half of the total large Bees on the trail. The runners up were Sports Tours International who collected 61 Bees and ran an impressive 13.5km on their Bee hunt.

The teams put out a grand total of 1500 tweets on the hashtag #BITCSponsorChallenge and raised over £2000 for the Lord Mayor of Manchester’s We Love MCR Charity.

Shaun Hinds, CEO of Manchester Central said: “As an integral part of Manchester’s business community, it was fitting that we should host the Bee in the City sponsor challenge. Bee in the City is an incredible initiative and one which we fully supportive of right from the beginning. We’ve already seen a huge amount of interaction with our ‘Bling Bee’ and we’re proud to be its home for the summer.”